Among the many artists in the United States and abroad, Robert Lebrón has distinguished himself over the years and is recognized by his peers, his collectors and by the general public as being one of the finest and most successful artists of the second half of this century.

Robert Lebrón, a native of New York City, was born in 1928. He delved into the arts at a very young age and began his formal studies at the New York High School of Music and Arts. After three years of study, with youthful impatience, he joined the armed services (under age). He soon found himself drawing cartoons for the local paper and quickly graduated to the animation department of the motion picture unit where he worked with several Walt Disney artists. Returning to New York, he attended the Arts Students League for five years, a prestigious school attended by such prominent artists as Norman Rockwell, Remington and Clark Hulings. 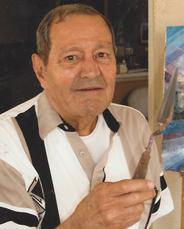 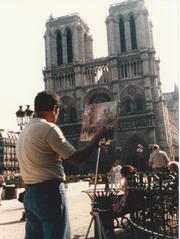 Later, during an extensive stay in Spain ''to find himself,'' Lebron developed his personal painting technique. The incredible talent to render the buildings, the people in action, essentially the entire painting with the palette knife is awesome. Thomas Hoving, former director of the Metropolitan Museum of Art writes in his latest book that paintings executed entirely with the palette Knife is an extremely difficult technique. Just as important is Lebron tremendous grasp of color and the ability to capture the essence of the moment in each and every painting. Lebron concentrates on painting street scenes and wonderful cities around the world. Each painting is full of life and actually tells its own story.His paintings have been published by prestigious art publications and others, such as the National Geographic society. His list of both private and corporate collectors is most impressive spanning most of the Western world.

If you want to see Robert Lebrón's paintings, browse his Original Artwork.